The Vehicle Theft Reduction Council of Malaysia (VTREC), together with the Royal Malaysia Police (PDRM), has launched its Vehicle Theft Awareness Campaign 2019 at the Bukit Aman police headquarters today.

A non-profit joint venture between the General Insurance Association of Malaysia (PIAM), the police and a number of other government and non-government agencies, VTREC aims to raise awareness about the dangers of vehicle theft and how to prevent such occurrences from happening.

According to the organisation, a total of 13,340 theft-related insurance claims were made last year, a 29% reduction from 2017; it also said that the figure has seen a 65% drop over a period of five years. Nearly 60% of them involved motorcycles, at 7,442 cases versus 5,155 for cars and 743 for commercial vehicles.

Motorcycles also made the lion’s share of vehicles reported stolen at 26,779, compared to 7,413 cars and 1,761 commercial vehicles. Overall, 35,953 thefts were reported in 2018, 15% lower than in 2017 and representing a 49% reduction in five years. Out of those, 22 vehicles were recovered from other countries, thanks to the efforts of authorities in neighbouring Thailand and Singapore.

Even with the encouraging reduction in thefts, it’s still a pretty high number, and a vehicle continues to be reported missing every 40 minutes. To reduce that figure, VTREC is asking car owners to follow a few steps to keep their vehicle safe. 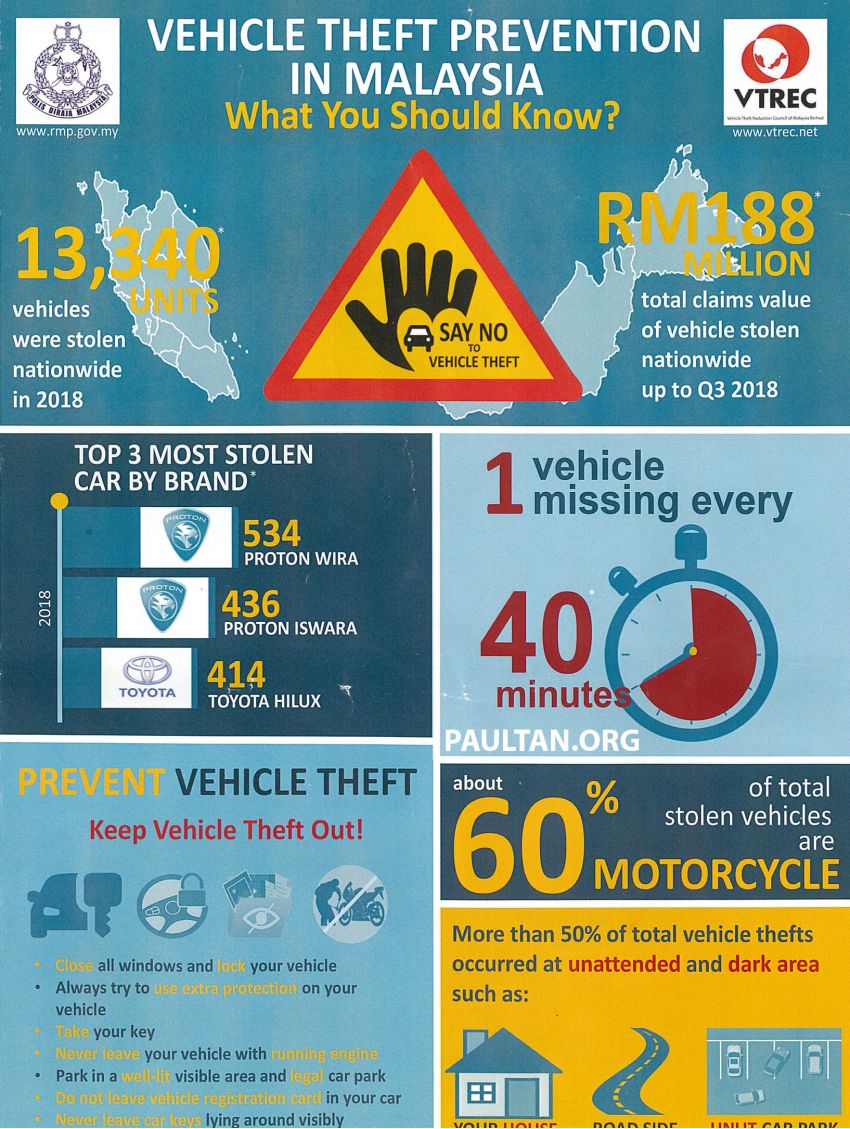 Owners are reminded to keep their vehicles locked and windows closed whenever they are parked, and take their keys with them at all times – they should not leave their vehicles with the engine running. Extra protective measures, such as using a steering lock, are recommended.

Vehicles should also be parked in a legal, well-lit carpark, as over 50% of thefts occur in dark and unattended areas. Owners should also refrain from leaving their vehicle registration card in the car itself and their keys lying around in places visible to prying eyes, VTREC says.

In conjunction with the campaign, VTREC is holding a selfie contest on Instagram to drum up awareness, with cash prizes to be won. There will also be a competition for those who write the most creative pledge to reduce vehicle thefts on a pledge wall. A roadshow is being planned, with locations to be announced later.