Six models tested by Thatcham Research have technology to block relay thefts. The key fobs have motion sensors that detect when the keys haven't been moved for a prolonged period. Having been stationary for minutes, the fob goes into a 'sleep mode'. This shuts down the signal in the fob so it can't be replicated by criminals trying to hack it from outside an owner's home.

Car makers have finally begun to fight back against the epidemic of keyless car crime, new tests have revealed.

Six of the latest models from major manufacturers including Audi, BMW, Ford and VW received the highest security rating available in a new round of assessments that scrutinises how well vehicles stand-up against 'relay' thefts.

It found that many of the latest cars with keyless entry and keyless start systems now have motion sensors built into the fobs to block organised gangs who use cheap hacking devices bought off the internet to steal motors.

The new Audi A6 Allroad, BMW 1 Series, BMW 8 Series and BMW X6, along with the Ford Puma and Volkswagen Passat all gained 'superior' ratings for all-round security from Thatcham Research.

The assessment group has been testing the security levels of the latest cars as part of new industry-standard tests introduced this year.

Much of these vehicle reviews are focused around their ability to prevent 'relay attacks' - when criminals steal vehicles from owners' driveways by hacking the keyfob that's inside the keeper's home and replicating the signal to unlock and start the car.

Car thefts have ballooned 50 per cent in the last five years as a result of this keyless crimewave, with a motor being stolen every five minutes, according to latest figures. Data from police forces around the UK revealed there has been a 45 per cent rise in reported thefts since 2014, before which there had been a six-year decline in motor crime. In 2017/18 alone, 112,174 vehicles were pinched from owners - the equivalent of 307 every day. The spike in thefts has mounted pressure on car manufacturers to improve their in-built systems to deflect these relay attacks.

Many now are using motion sensors inside the keyfobs to detect when it has been stationary for a period - then triggers a sleep mode.  This means the fob will no longer respond to attempts to relay its signal. Full functionality is only restored when the key is moved again by the owner.

Richard Billyeald, chief technical officer at Thatcham Research said this advancement was a step in the right direction but makers still needed to do more to end this spell of keyless car crime

'It's positive news for consumers that carmakers, in increasing measure, are making this fix available,' he said.

'The motion sensor fob is a good short-term option, but the goal for carmakers must be to design out the vulnerability entirely.

'Until then, a fundamental security flaw remains.

'We urge manufacturers to bring keyless technology to market in secure form and remove from drivers the onus to provide additional security.

'Closer collaboration on the design and implementation of new technologies is the key to identifying vulnerabilities before they entrench in the vehicle parc.'

He said the systems aren't a guaranteed failsafe against keyless crime, and owners should check their fobs before assuming they're entirely secure.

'We advise consumers to check how long it takes before the sleep mode on their keyless fob is engaged,' the security expert suggested.

'Some fobs go to sleep in one or two minutes, others in 15 or even as long as 30 minutes.'

While this is great news for those in the market for a new car, it will do little to help drivers who have recently bought vehicles with keyless technology that don't have such features to block relay attacks.

'Many owners who opted for keyless entry and start will have done so before a motion sensor fob was issued or will own a car where a fob of this type is not available at all,' Billyeald said.

If a motion sensor fob is not available drivers should:

This is the third set of consumer security ratings launched in 2019.

Part of these measurements includes security engineers from Thatcham conducting a relay attack test on the vehicle's keyless entry and start system.

To date, 24 vehicles have been assessed, with nine down-rated to 'poor' having failed Relay Attack testing.

'Superior' ratings for all-round security and for having a fix to the keyless vulnerability in place have been awarded to 14 cars.

Only one car, the Suzuki Jimny, has been downrated as a result of all-round security failings, despite not having a keyless entry and start system.

* Models that have most recently been tested 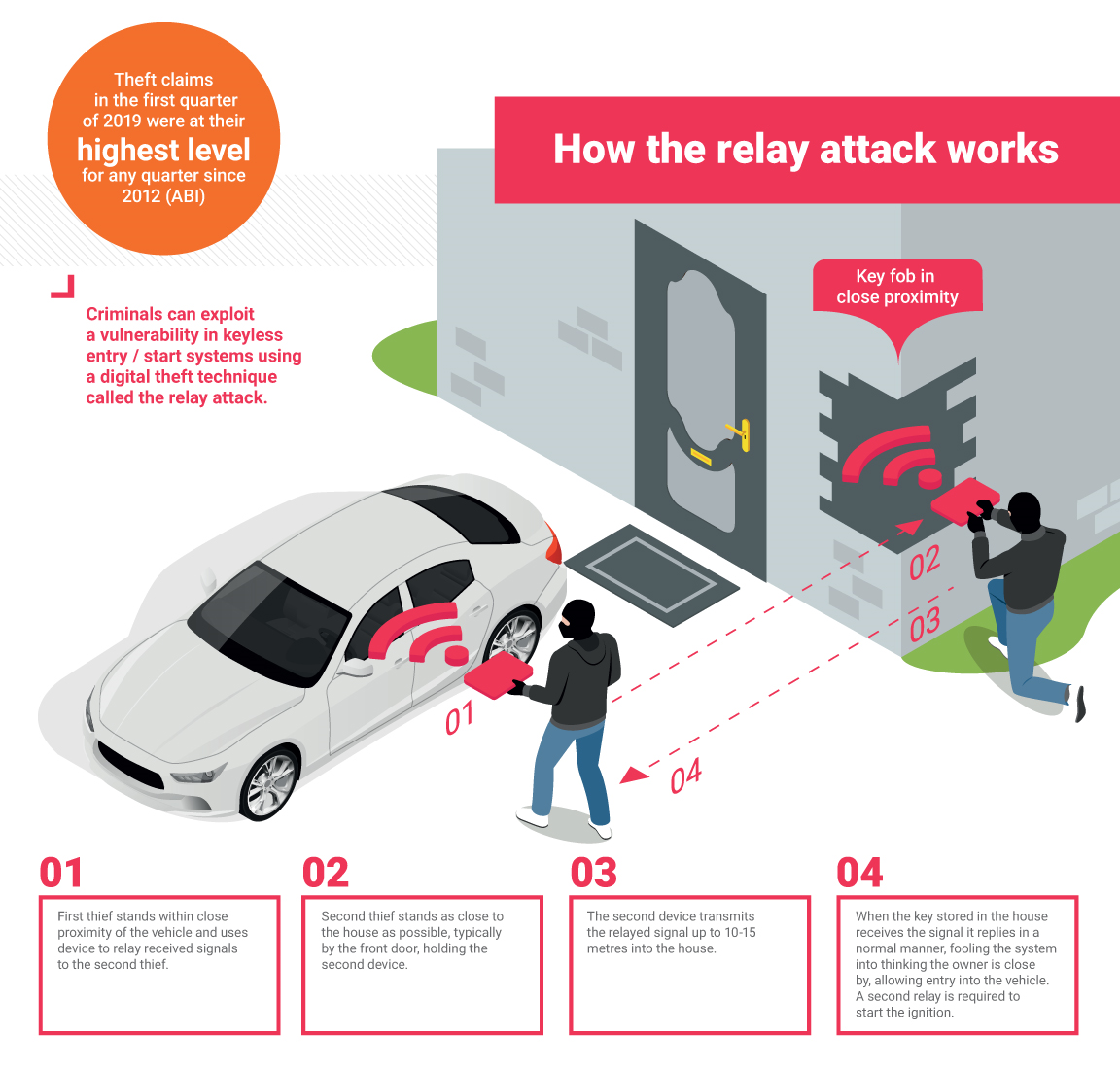 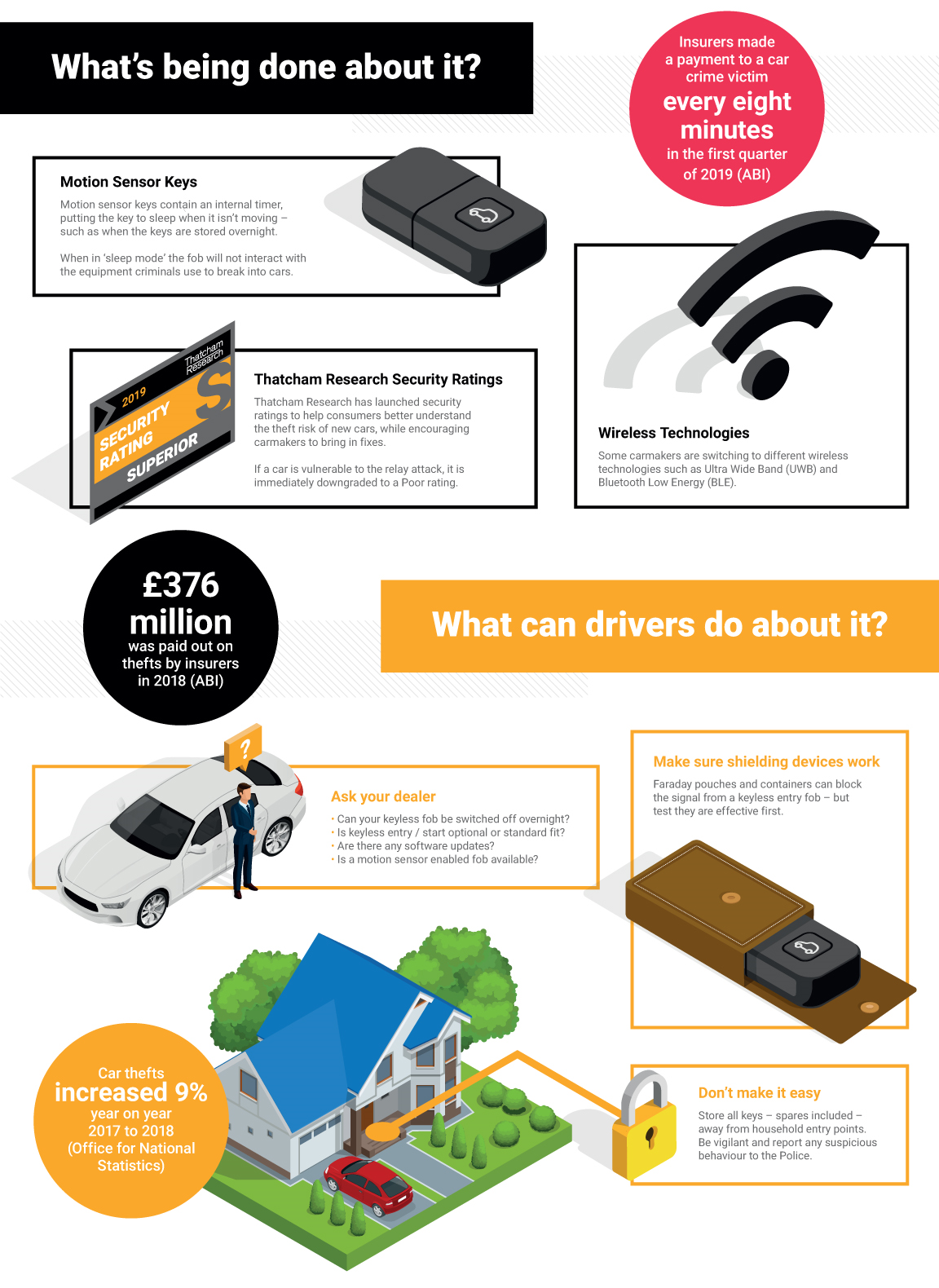