There were over 114 thousand motor vehicle thefts in England and Wales in 2018/19 and increase of over 8 thousand offences when compared with the previous year and an nine year high for this type of crime. Despite the recent increases, there were still fewer vehicle thefts than there were in 2002/03 when there were almost 307 thousand. This was followed by a steep ten-year decline which saw vehicle thefts reduced to just 70 thousand in 2013/14. 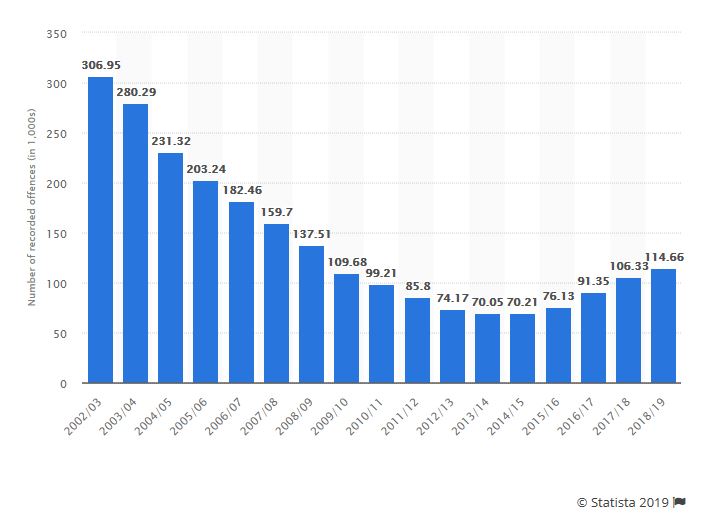 Links with overall crime
The sharp fall in motor vehicle thefts seen between 2002/03 and the mid-2010s, followed by a sudden increase in recent years tracks a pattern that can be observed in the overall crime figures for the United Kingdom In total, there were approximately 5.87 million crime offences in 2017/18, an increase of 1.43 million offences when compared with 2013/14.

Staff and funding cuts to blame?
The recent uptick in overall crime has been sudden and severe enough to catch the attention of the British media. It has not gone unnoticed that this rise occurred following cuts to funding for the police which was then followed by a decline in officer numbers Although police funding increased slightly in 2017/18, whether or not this will be enough to reverse current trends remains to be seen.