A unique DNA spray is being trialled by Greater Manchester Police (GMP) to ‘tag’ criminals who officers can’t immediately catch.

The SelectaDNA ‘tagging’ spray is being used to target nuisance off-road scrambler bikers and criminals stealing mopeds and motorbikes, or using them to commit crime. Officers can also use the spray if they are unable to pursue a suspect on a scooter or bike for safety reasons.

The spray marks equipment, clothing or skin with a uniquely-coded but invisible DNA solution that will provide 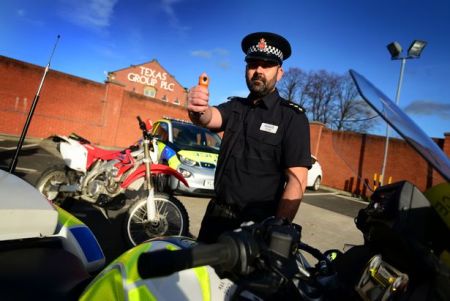 forensic evidence to link individuals or items to a specific crime. The spray shows up under UV light and clings to skin and clothing for months.

GMP’s Road Policing Unit have launched a six-month trial of the spray after successes in other forces including West Yorkshire Police, West Midlands Police, Surrey Police and The Metropolitan Police. Police chiefs said the trial period would also be used to determine whether the kit could be used to help gain convictions for other crimes and it’s use would complement existing evidence-gathering tools, like body-worn cameras.

Chief Insp Tariq Butt, head of GMP’s traffic unit, said: “It has been successfully used in other forces and we want to trial it here in Greater Manchester to provide us with another tactic to combat anti-social, off-road biking and against those who steal and commit crime involving motorbikes and scooters.

“As part of the trial we will see if it can be used within wider local policing and to detect and solve other types of crime. The kit will be carried by specialist road policing officers from the safer roads targeting team.”

James Brown, MD of SelectaDNA, said: “We are constantly evolving the use of our synthetic DNA to assist police in the fight against crime.

This is a great example of how our innovative technology is helping police forces, including GMP, to catch criminals and remove anti-social offenders and dangerous drivers from our streets.

It only takes a tiny drop of DNA spray to tag and identify an offender and this tactic will undoubtedly lead to more seizures and prosecutions.”