International criminal gang who stole high end supercars including a £300,000 Lamborghini tried to claim the €10,000 reward when it turned up in an Essex showroom • The car was stolen from Mallorca this summer, and later turned up in Essex • The owner offered the reward because the car had sentimental value • Spanish, German and UK police worked together to smash car thief gang • The thieves stole top-end cars, motorbikes, jet skis and even aircraft 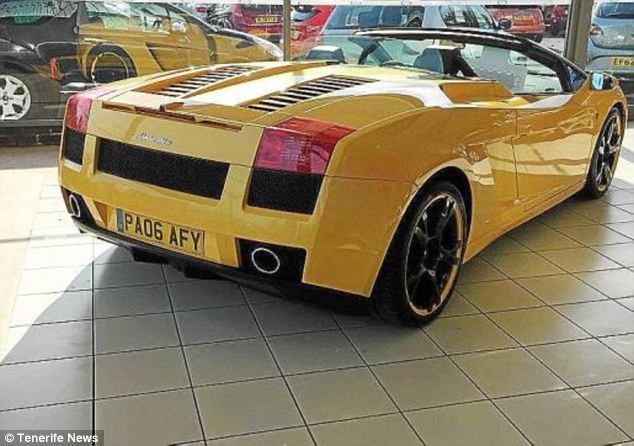 A cocky gang of international car thieves stole a £300,000 Lamborghini and then planned to claim the €10,000 reward offered by its owner, Spanish police have revealed.

The luxury sports car, owned by a German man, was stolen from Mallorca this summer, and was later found in an Essex car showroom.

Spanish, German and British police worked together to smash an international vehicle crime operation, run by a gang of highly organised thieves.

The thieves were involved in a long-running plot to steal top-end cars, motorbikes, jet skis and even aircraft, selling some of them with altered number plates.

In some cases vehicles were even cut in half and scrapped - sometimes in exchange for drugs money.

Stolen motorcycles were taken to Morocco, where they were exchanged for drugs.

The more than 450 horsepower Lamborghini Gallardo, worth €350,000, had been parked by its owner in a rented car park on the Spanish holiday island.

It had already been staked out by the gang and the car's German owner, who returned to the car park to find it missing.

Police have revealed workshops in Mallorca, Malaga, Murcia, Germany and England were all involved in the highly organised scam.

The yellow Lamborghini Gallardo was later found offered for sale in a car showroom in Essex.

'We discovered that the thieves were even planning to collect the €10,000 reward,' said a spokesman for the Spanish Civil Guard.

'The owner had offered the reward, not just because of the economic value of the Lamborghini but for sentimental reasons as well as it had been owned by his late wife,' he added.

Eleven members of the criminal organisation have been arrested in raids across 13 homes, as well as seven mechanic workshops in Mallorca, Malaga, and Murcia in Spain, in Germany and in England.

Numerous vehicles were also seized, including cars and motorcycles.

The gang even had their own legal officer who falsified ownership documents and licence plates.

'The network specialised in the theft of high-end vehicles, which were later sold to other countries in Europe and North Africa,' said a spokesman for the Spanish Civil Guard.

The leader of the organisation, based on Mallorca, co-ordinated the theft of vehicles, jet skis and aircraft, which were stolen to order.

On some occasions, the gang went along to compounds where cars were being held and presented false court orders so they could drive them away unchallenged.

Gang members often kept watch on their owners to stake out their movements and any security measures they used to secure their vehicles.

The stolen vehicles were then driven straight to workshops where their matriculations were changed.

'One of the top sports cars was stolen in Frosinone, Italy, showing the extent of the gang's operation,' said the spokesman.

Police said several of the suspects had previous convictions for crimes related to the illicit traffic of vehicles.