Gone for good: Police fail to recover more than half of stolen cars in Britain, new probe reveals

- Auto Express investigation finds 522,214 vehicles were stolen in the last decade. - Of these just 236,636 were marked in police records as being recovered. - It means 45.3% of stolen cars are never returned to their owners - and recovery rates are falling. - Falling policing numbers and rise in keyless car thefts have been blamed for poor recovery ratio.

Fewer than half of cars stolen in Britain are recovered and returned to their rightful owners, a new investigation has found.

Just 45.3 per cent of motors taken without the consent of their keepers between 2009 and 2018 were traced and reclaimed by UK forces, research by motoring magazine Auto Express shows.

Merseyside Police had the best recovery rates of 75 per cent, while West Midlands had the lowest with fewer than 12 per cent of vehicles stolen from the area being found.

Auto Express crunched the numbers following a series of Freedom of Information requests to police forces across the UK.

In total it found that 522,214 vehicles had been stolen in the last decade, and just 236,636 of these were marked in police records as being returned to owners.

That's based on the feedback from 25 forces that responded to the FOI requests.

And recovery rates of vehicles is falling, according to the statistics.

Car theft rates reached a six-year high in 2017, with 43,308 motors being reported as stolen during the year, the magazine said.

The latest recovery figures released this week show that just 46.5 per cent of the cars were found by police - the lowest ratio of returns since 2012.

Stolen vehicle recovery rates in the last decade, according to UK police forces 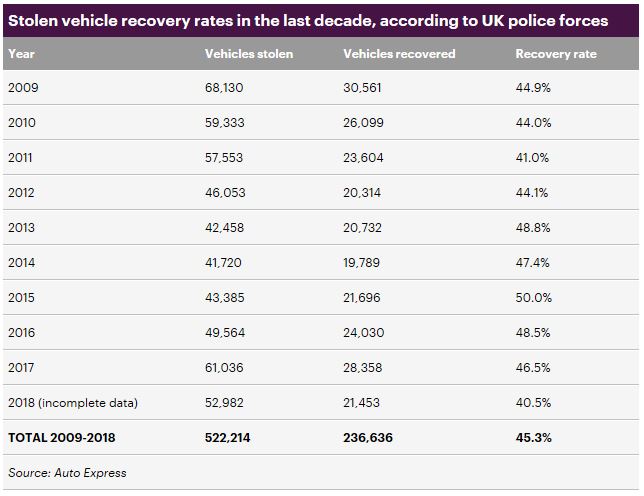 Motoring groups claim this could be due to recent policing staff cuts, which have seen a reduction of 20,000 officers in the UK since 2010.

However, Auto Express highlighted that there are inaccuracies within the data, which is caused by how forces report on vehicle thefts and recoveries.

As well as 20 of the 45 forces contacted by the magazine being unable to supply any figures for stolen motors in their areas, some that did reported on 'vehicle' data - which is inclusive of stolen motorbikes, vans, lorries and - incredibly - a pinched aeroplane.

He added: 'The fact that data appears to be collected and analysed inconsistently in some cases is also a worry - this data is surely the only way to understand the scale of the problem.

'While it is well-documented that police forces are under severe resource pressures, it is ironic that clearer data would support their case for additional government spending.'