Car thieves’ most-wanted list and the luxury cars being sold for as little as £1,000

he models at the top of cars thieves’ most-wanted list have been revealed as new data shows stolen prestige vehicles being sold on for as little as £1,000.

An investigation by car security experts AX has revealed a “shopping list” of desirable models as well as the shockingly small sums they then changes hands for on the black market.

The top of the list is made up of cars from just four manufacturers - Audi, BMW, Mercedes and Land Rover. It must be noted that these are the cars thieves want, not necessarily the most stolen models in the country but separate figures from insurers show that thefts of premium brands such as these have doubled in the last five years.

Land Rover’s spectacular Range Rover Sport SVR might cost north of £100,000 when new but to the thieves who target it, it’s worth a measly £3,000 when they sell it on.

Car thefts have risen sharply in the last five years, up by around 50 per cent to 112,000 in 2017/18. Part of this has been blamed on the use of keyless entry systems fitted to many premium models and increasing numbers of mainstream cars. 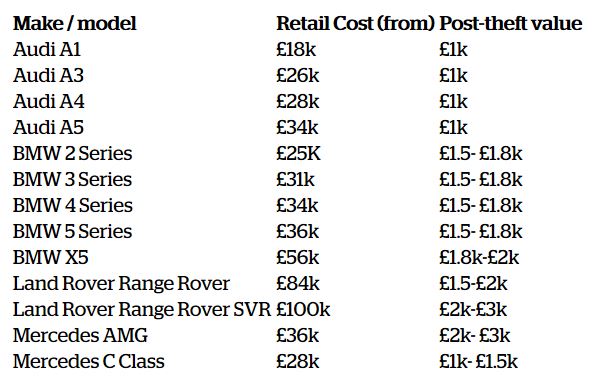 Once cars are stolen, either through high-tech relay attacks or more traditional methods, they are quickly sold on to criminal networks which then exports or dismantles them for parts.

AX recently highlighted the way gangs are using encrypted message apps to share their lists of target cars and organise their theft and resale.

Director of investigative services at AX, Neil Thomas, said: “The list is quite shocking, despite my 30 years working in the police force. We know how the criminals operate but, with the UK theft figures in mind, it’s a sharp reminder of the problem car owners and the industry faces.

“Rather than the cars that are stolen most in the UK, this list represents the criminals’ wish list of preferred targets. A typical, current Ford Fiesta, for example, would change hands for little more than £200.

“Business and private owners alike are affected by the increase in thefts, so it’s paramount to take precautions to avoid being targeted, or ensure vehicles have robust covert technology so that they can be recovered. Most tracking devices are simply removed after being stolen.”