Are stolen vehicles taking longer to be recovered?

Australia’s vehicle theft landscape is constantly changing. Traditionally considered a single crime, vehicle theft is now increasingly at the centre of a range of other crimes such as aggravated burglaries or robberies, arson, drug or firearms dealing or terrorism (in the form of vehicle-based attacks or explosions).

Nationally, there appears to have been an increase in the time taken for stolen vehicles to be recovered, indicating that thieves may be holding onto stolen vehicles for an extended time to conduct other such offences.

To investigate further, the National Motor Vehicle Theft Reduction Council's CARS team has conducted research into the patterns of recovery times of stolen vehicles in Australia for the period 1 July 2000 through to 30 June 2019 (with a recovery status of 31 October 2019).

The findings clearly show a shift towards longer recovery times in the short term theft category. This is evident across all vehicle types to varying degrees, but is more pronounced in passenger/light commercial vehicles (PLCs) stolen. Between 2000/01 and 2018/19 there was a 12 percent drop in the proportion of PLCs recovered within 7 days (80% vs 68%, respectively). 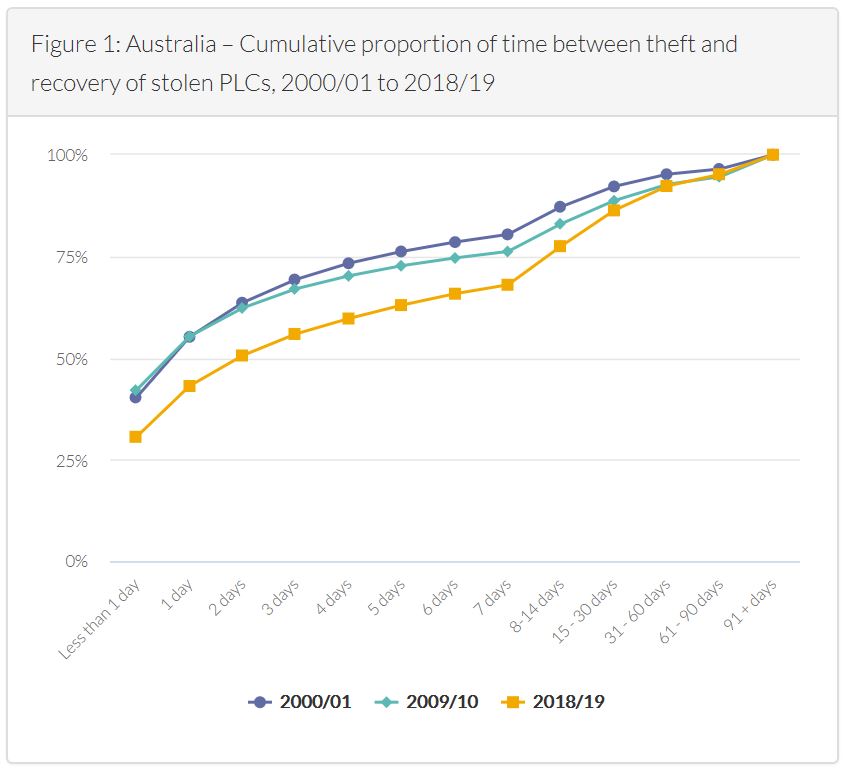 A deeper analysis revealed further differences in the time taken for vehicles to be recovered based on geographical areas, vehicle market segments, vehicle ages and estimated vehicle value. Interestingly, between 2009/10 and 2018/19: 

For other interesting finds and to read the full research report, click https://carsafe.com.au/time-to-recovery