All nominations should be sent to: .(JavaScript must be enabled to view this email address)

This award was created in 1985. It is intended for the President of IAATI to honor any members who have distinguished themselves by giving extraordinary service to IAATI. 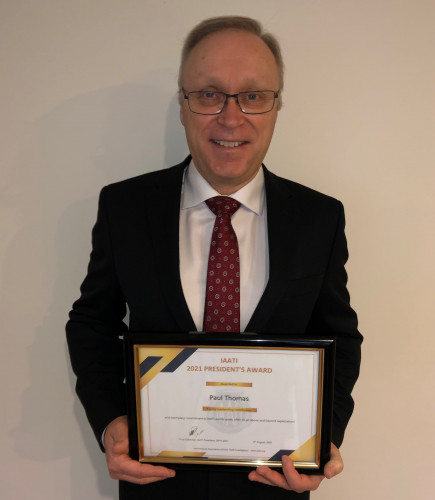 The President’s Award was created in 1985 and it is presented at the sole discretion of the President. This award recognizes and honors any specific person or organization who made a significant and sustained contribution to IAATI or to the prevention, detection, investigation, and prosecution of vehicle-related crime. Notably, to receive the President’s Award an exceptionally high standard of excellence must be demonstrated by the recipient receiving what is considered one of IAATI's most prestigious awards. The President's award is second to only the Raymond H. Dreher Memorial Award.

This year’s recipient demonstrates the values that define and shape the Association. He serves as a role model for IAATI providing exceptional support and assistance to aid his IAATI colleagues. His contribution drives the association with our members to strive for higher levels of achievement. He constantly displays an exemplary commitment to IAATI and its goals, often to go above and beyond expectations. This role model and mentor demonstrated outstanding leadership with his qualities of contribution, creativity, collaboration, dedication, loyalty, and original thinking at the Board and on the committees he chairs. IAATI, the Board, and I are truly blessed with the support of your 1st Vice-President, Paul Thomas, without whose support an already challenging and extended Presidency would have been almost unbearable. It is my privilege to announce 1st Vice-President Paul Thomas, as this year’s recipient of the President’s Award. 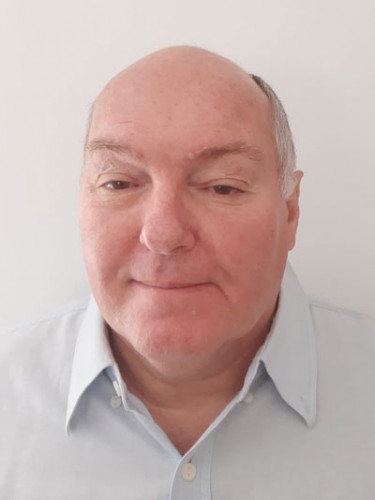 The second recipient of the President’s Award 2020 is Captain Kobi Neethling of the South African Police Service, a 35-year vehicle crime detective veteran. He is also an IAATI member since 1990. He started his police career in 1978 and was transferred to the Vehicle Crime Investigation Unit in 1985. He served in that capacity until retiring as a Detective Captain at the end of April 2020.

He is a true expert in the field of vehicle crime prevention, detection and investigation and is well known in South Africa.

His dedication to IAATI and his contribution to the fight against vehicle crime is undisputed. This includes:

Two major cases where he was one of the key investigators are:

He is also the recipient of numerous medals and commendations.

Capt Kobi was also instrumental in the building of the IAATI SAB, recruiting members, training, assisting with seminars, planning and executing multi-disciplinary operations with law enforcement and IAATI private sector investigators working hand-in-hand, etc. He was liked and respected by his fellow officers. As a police officer, IAATI member and friend, his honesty, integrity and willingness to always assist is an inspiration to all. 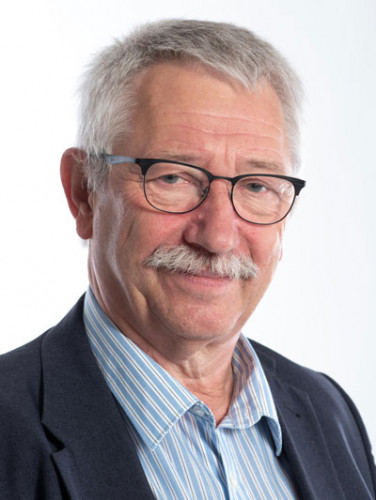 The first recipient of the President’s Award for 2020, Gerard Van Warmerdam, has been a member of IAATI since 1999. Even before becoming a member, he had already attended several IAATI meetings. He worked for law enforcement from 1974 until 1993 at which time he left to begin work as an instructor for insurance companies, police departments and as an insurance investigator, which he still does. He is a specialist in vehicle identification. The training he conducts is about practical and technical investigation in the field of vehicle crime. As a specialist he is regularly asked to testify as an expert witness due to his experience and knowledge concerning vehicle crime and vehicle identification. Gerard is Dutch (from the Netherlands).

Gerard is a very positive member of IAATI and very supportive of the organization as a whole. Gerard is not a Board member. He is a branch member who believes in the ideals of our association and is not afraid to speak out about them. Also, he gives a great deal of his time and effort during their seminars with his photography. While walking around taking photos, he actively interacts with the members present, making an effort to meet with as many as possible. He is a member who works every day to make IAATI strong through its chapters and branches.

The 2019 President’s Award by IAATI President William Johnson honored a group of Investigators from New Mexico.

During the week of August 16, 2019, the Office of the Superintendent of Insurance in New Mexico announced an operation that was conducted over the course of one week involving  stolen vehicles. During the New Mexico State Fair, the OSI and members of the New Mexico  Auto Theft Task Force conducted a joint operation targeting vehicle thieves around the  Albuquerque area. During the operation, ten vehicles reported stolen were recovered by the  Task Force with 16 arrests made and Agents have cleared an additional 11 felony arrest  warrants. Subsequently 11 individuals were indicted in New Mexico District Courts for auto theft  related crimes and have failed to appear in court or live up to conditions of release. 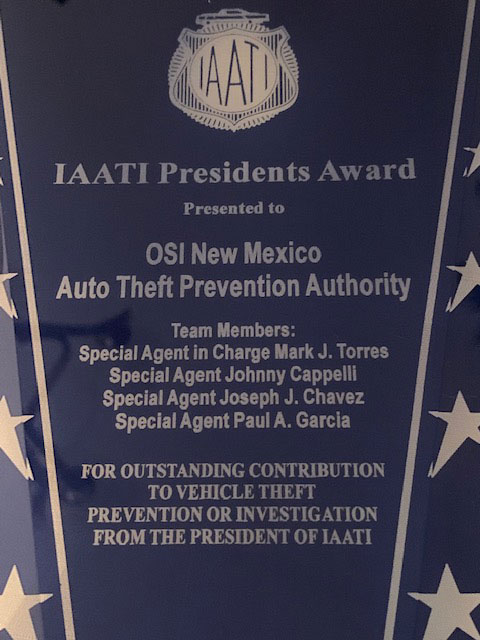 Torbjörn Serrander has been an IAATI member for 20 years.  He is a member of the European Branch where he conducts training and is very active with the website committee. He has been recognized by Interpol as a member of their training program “Formatrain” (train the trainers program) and an active member of Interpol’s Stolen Motor Vehicle Task Force. He has presented training modules at numerous training sessions organized by IAATI EB and Interpol.

Torbjörn is a major contributor to the IAATI IT Committee. He is one of the few members who has taken an active interest in ensuring that there is new and fresh information uploaded to the International website. Almost on a weekly basis Torbjörn uploads news articles from around the world that are of interest to the IAATI members. Torbjörn has uploaded a total of 38 news articles in just 10 months. While this may sound like a relatively simple task, it is one that is incredibly important and one that virtually none of our other 3,500 members throughout the world does. Without someone like Torbjörn, members and potential members would visit our website and see information that is months out of date.  He has also provided a number of articles for inclusion in both APB and Auto Theft Today to keep members informed and up to date with current trends around the world. 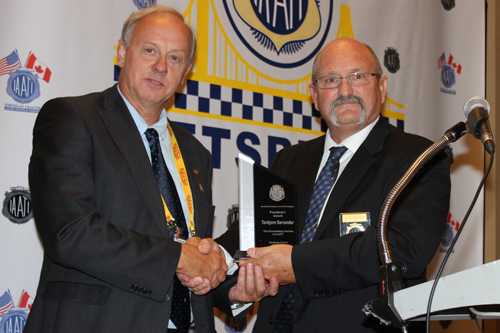 John took on the responsibility to chair the on-site committee for the 66th annual IAATI training seminar and conference. I don’t think he realized what he got into when he took on this project. This has been a long stressful year for John. He was tasked with numerous requests that required him to make changes to meet the needs of IAATI. Even though this seminar is hosted by the NERC, there was a lot of required scheduling per the IAATI SOP. John and his team worked long hours and made many changes to meet the needs of IAATI. John was inundated with emails wanting information about the progress of the committee. He did a great job working through the issues that were brought up to make sure that certain directives were met. John did this while still doing his full time job with the NICB.  I appreciate all the work John and the committee did to make this a successful and outstanding conference. 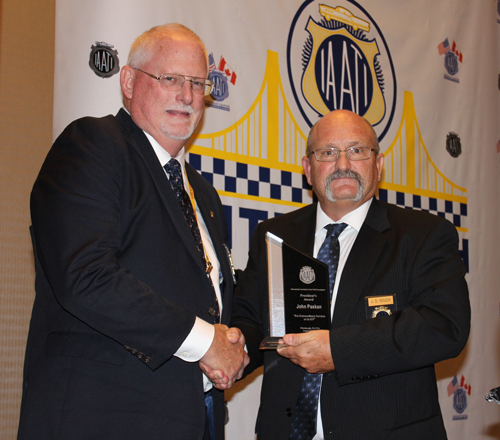 During the past year as IAATI President, I had the opportunity to work with many people.  One person really stood out and worked very hard. Reg Phillips was tasked with chairing the ATPA Committee and the Component Parts Marking Award and Award of Merit committees. Reg was also on the Asian Development Committee, IT Committee, Manufacturers Committee, NAEC Committee, and the Resolutions Committee. He was very active in all of these committees and spearheaded the support for the reaffirmation of the ULC-Can 338-98 Standards for vehicle safety and security.

Reg spent many hours on IAATI business, conducting numerous meetings and conference calls.  He kept the committee members informed and active in their assignments. He would then provide detailed emails and reports of the committee activities. He took a personal ownership of each committee and held each committee member accountable, making sure the deadlines were met. Reg established sub-committees and set goals to make sure that the committee was progressing and meeting the IAATI goals and objectives. 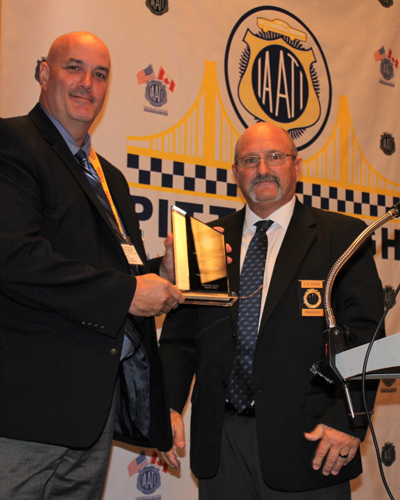 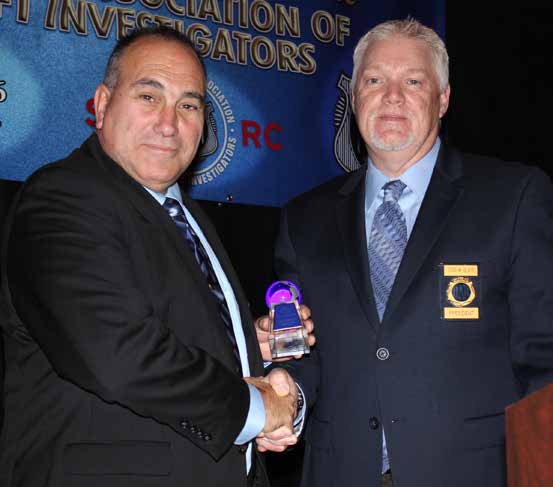 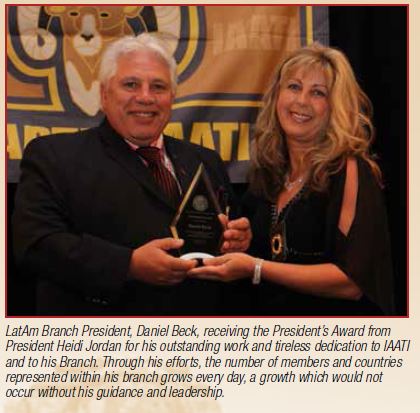 LatAm Branch President, Daniel Beck, received the President’s Award from President Heidi Jordan for his outstanding work and tireless dedication to IAATI and to his Branch. Through his efforts, the number of members and countries represented within his branch grows every day,

The award was created in 1985. It is intended for the President of IAATI to honor any members who have distinguished themselves by giving extraordinary service to IAATI. The 2014 award was presented to Kat Anderson. Kat has worked at the South Plains Auto Theft Task Force in Lubbock, Texas USA since 1998 and is currently the Treasurer of SCRC. 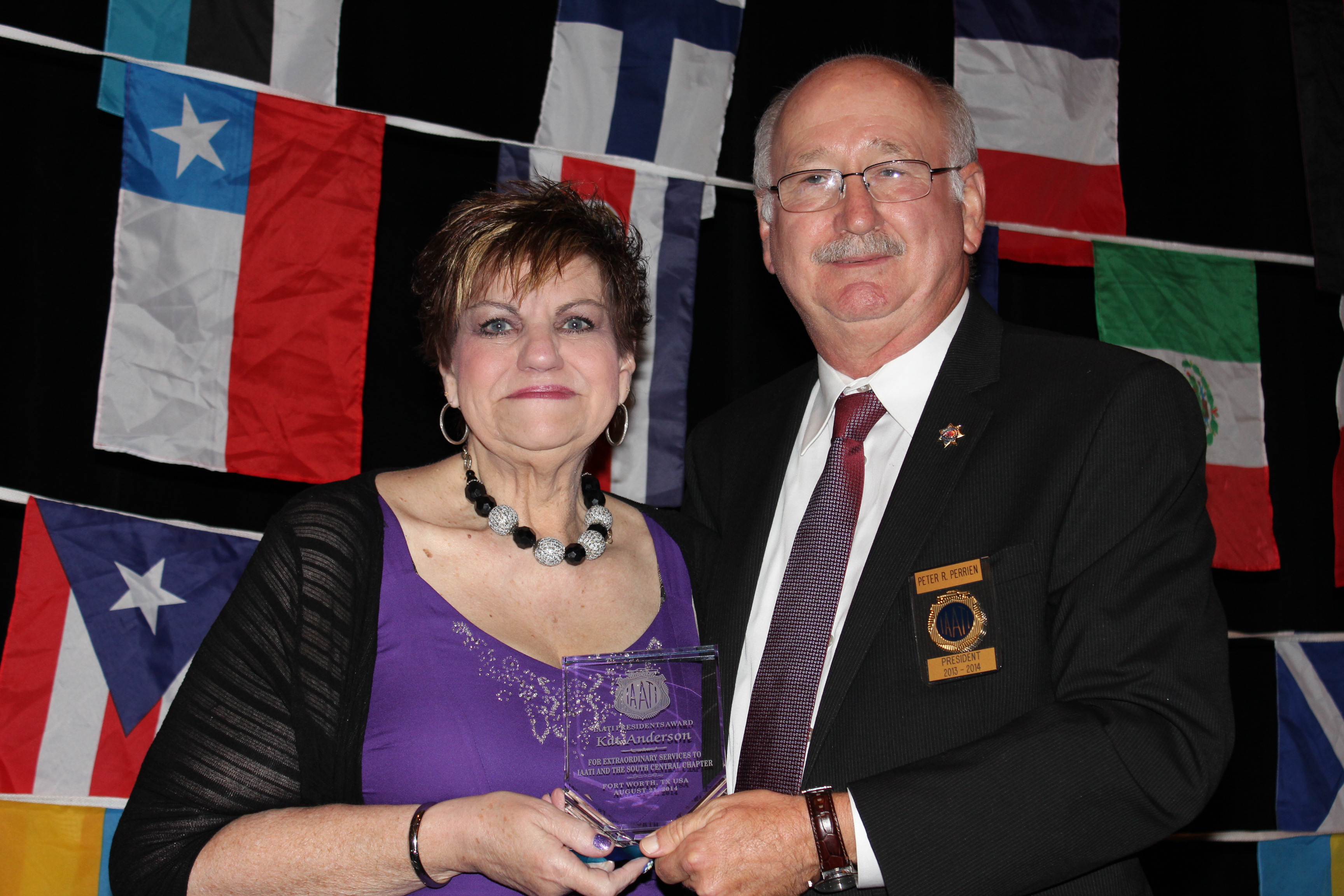 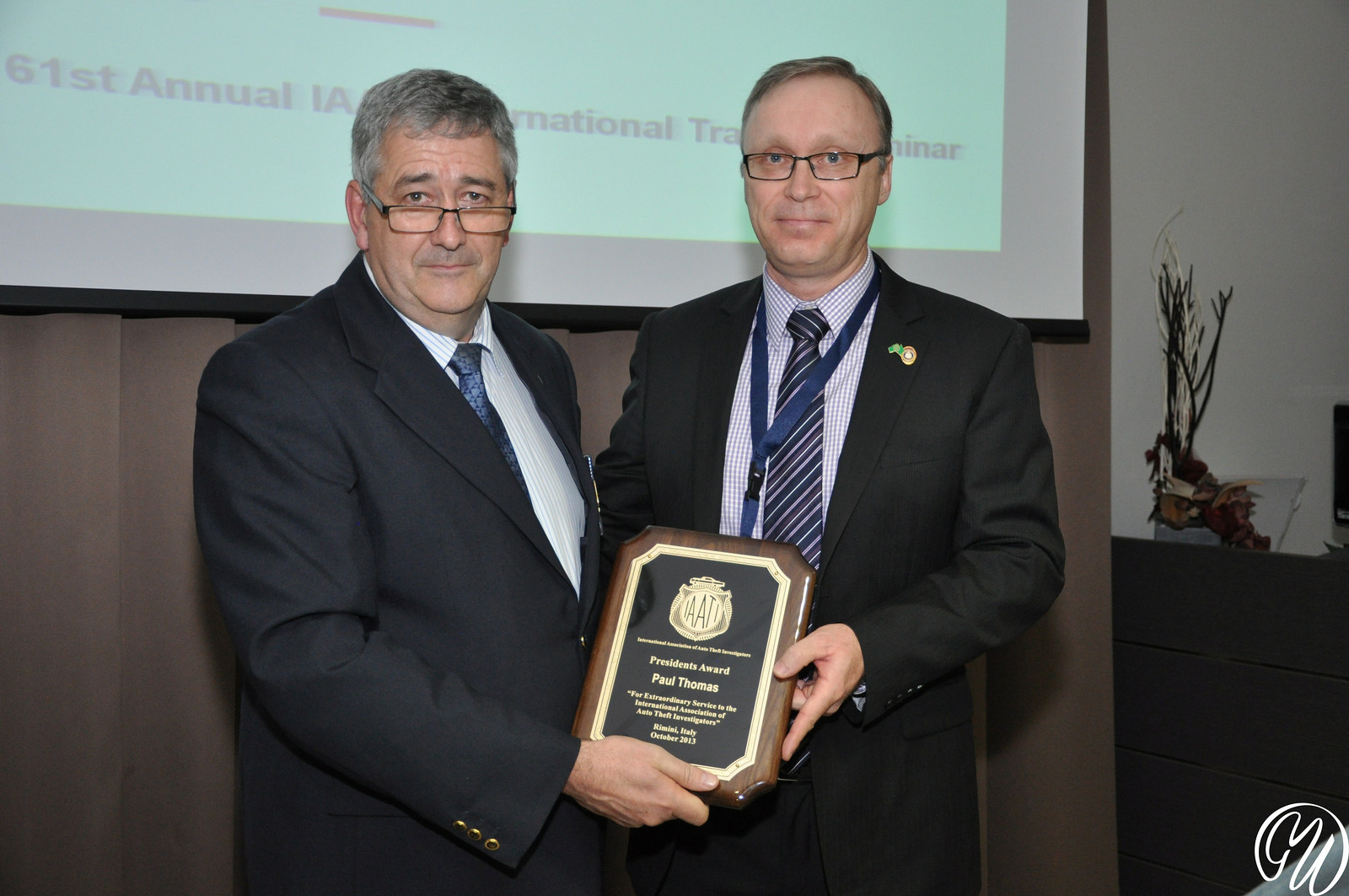 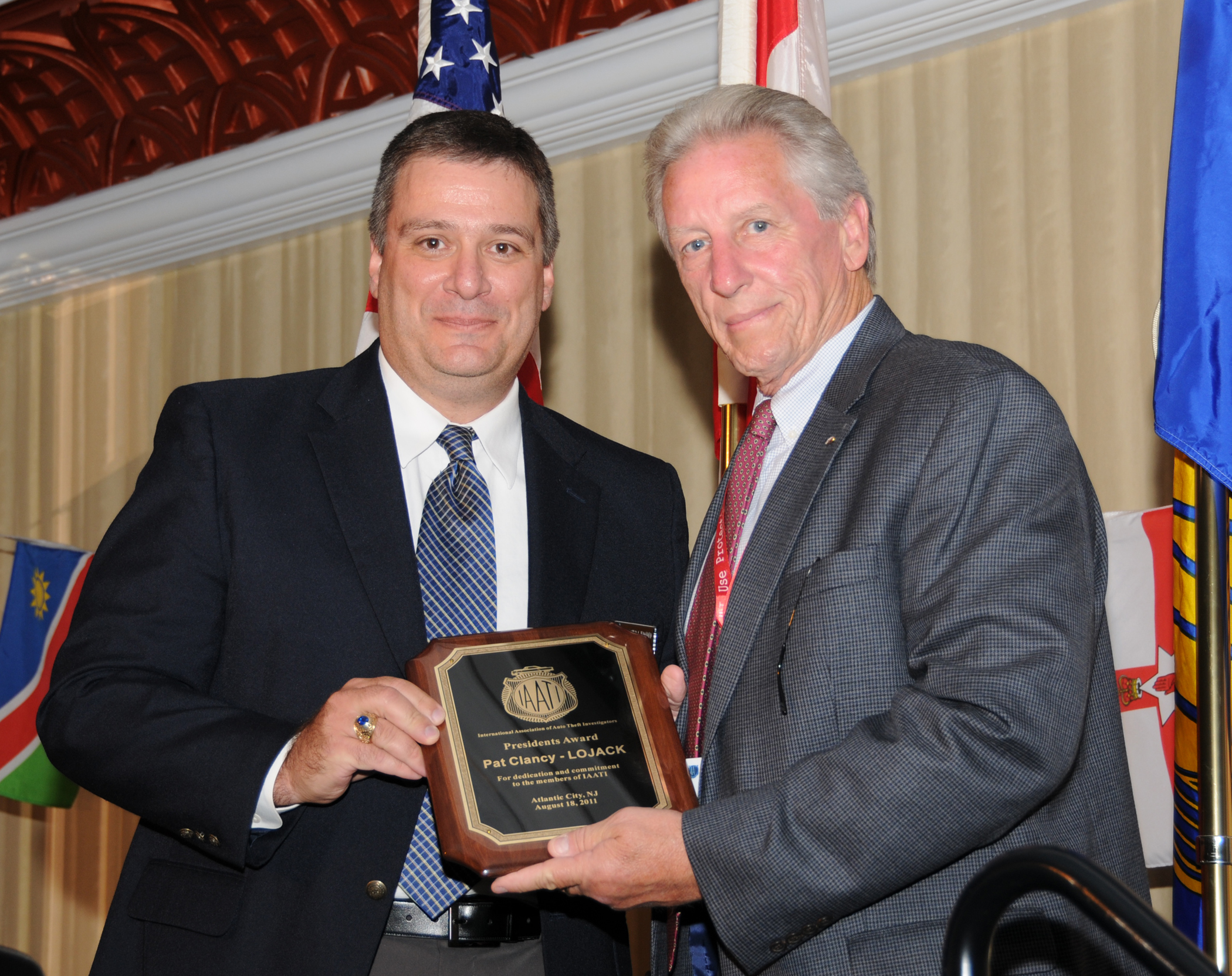 Pat Clancy – Pat is Vice President of Law Enforcement for LoJack and has been a staunch supporter of IAATI for 25 years. I’ve known Pat since 1996 and consider myself fortunate to have known Pat as a friend and colleague. Over the years Pat has seen the many changes in auto theft and has realized that developing and continuing a true partnership with IAATI is invaluable. The relationship between LoJack and IAATI has been much appreciated over the years and is largely due to Pat’s dedication and perseverance. As a result, I awarded Pat Clancy of LoJack the President’s Award because of his personal and professional efforts over the years. 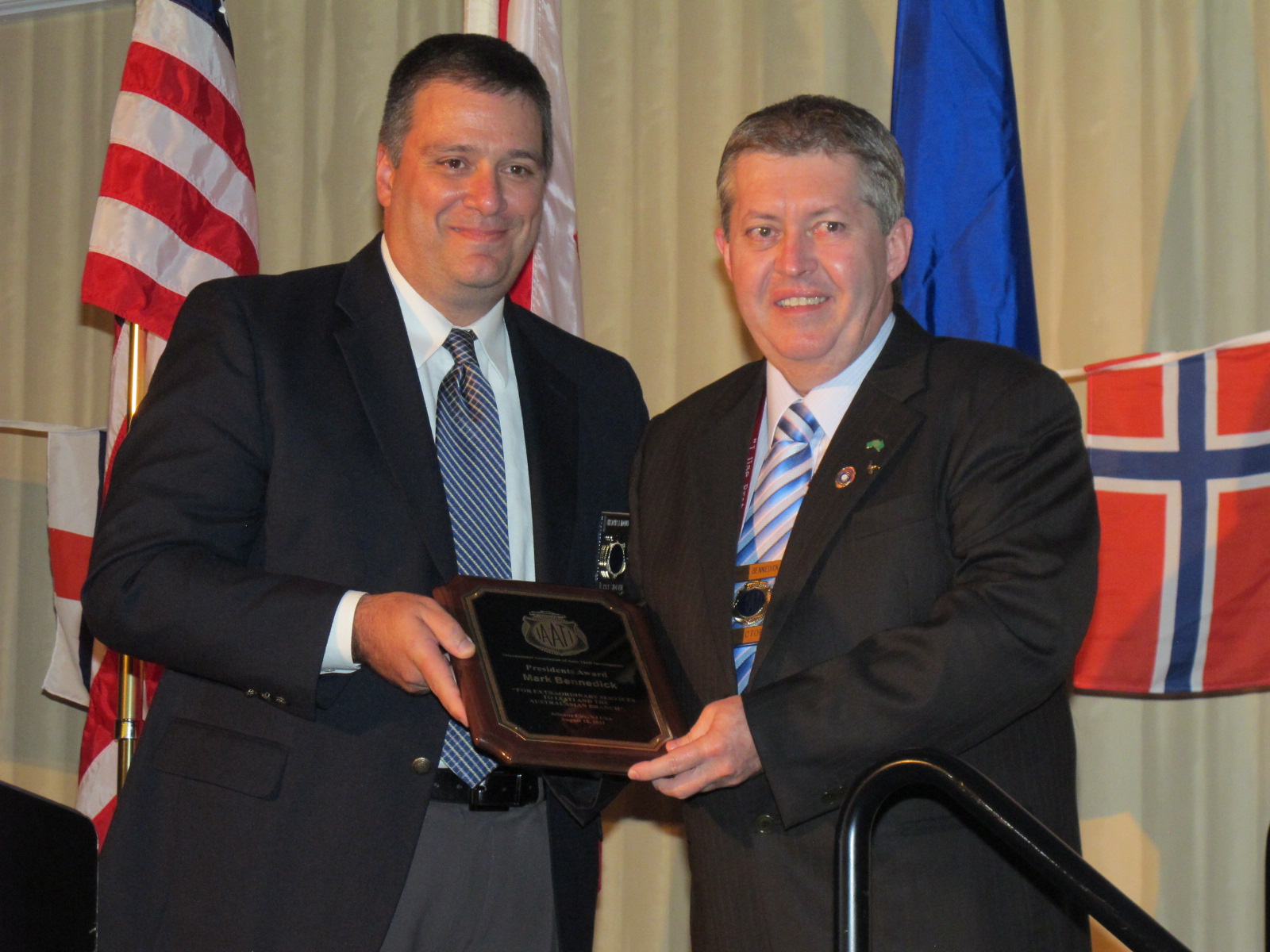 Mark Bennedick – Mark works for Suncorp Insurance in Brisbane, Australia, currently serves as President of IAATI’s Australian Branch and is also a director on the IAATI board. Over the years, Mark has been instrumental in the continued success and growth of the Australian Branch. He played a vital role in the success of the IAATI conference held in Sydney in 2008 and also has spearheaded the chapter’s continued expansion by coordinating the upcoming conference to be held in Taipei. He also took on the role of chair of the certifi cation committee and is currently working on improving and updating the certifi cation information and process. I awarded Mark Bennedick of Suncorp Insurance the President’s Award because of his vision and contribution to the continued success of the Australian Branch and of IAATI. Both Pat and Mark unselfi shly dedicate their time and expertise for the continued success of IAATI. Many times, people who toil behind the scenes don’t do it for the recognition but simply because they see the need and step up. Over the years it has been a pleasure to work with both gentlemen. I admire their efforts and appreciate their friendship. Please join me in congratulating them on their well deserved recognition. 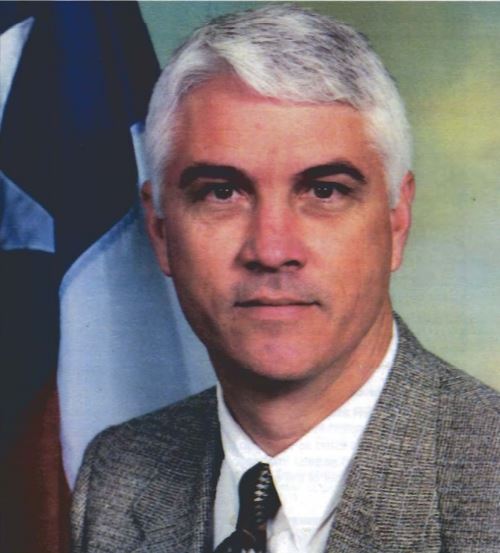 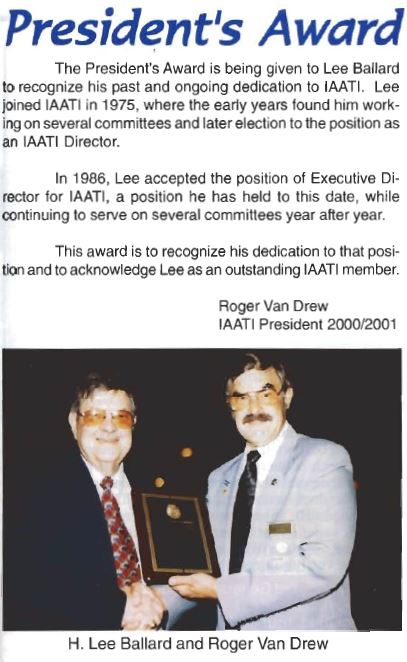 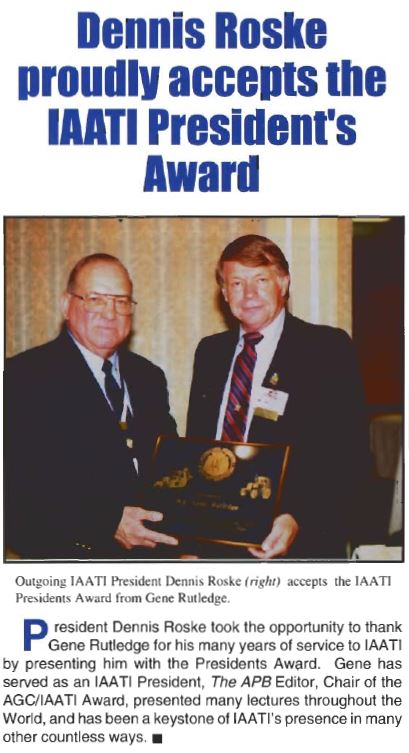