All nominations should be sent to: Executive Director PO Box 223, Clinton, NY 13323-0223 or .(JavaScript must be enabled to view this email address)

The IAATI Component Parts Markings Award is intended to honor any person or unit possessing the qualifications of an active member of IAATI, although membership is not a prerequisite, who has in some way distinguished themselves in vehicle theft investigations where OEM or aftermarket identification technology/solutions have played a significant part in the success of the investigation.  The identification solution may include, but is not limited to:
VINs labels/stamps, OEM ID marks, OEM electronic parts marking, etching or branding solutions, electronic parts marking RF tags, microdots, DNA fluids, and UV light markings, etc 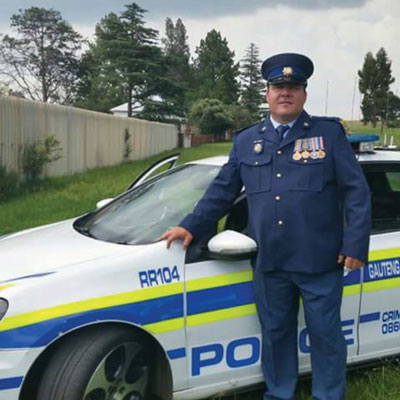 One of our most exciting tasks as co-chairs of the Vehicle Identification Committee is being able to give an award for excellence, proactive thinking, and dedication. This year’s winner certainly displays these qualities so very well!

Below is a copy of his nomination, and since it says it all and so well, we thought it best to simply use this for this year’s APB Components Parts Marking Award description.

Background of Warrant Officer Jacobs: W/O Jacobs has been an active member of SAPS Law Enforcement for 26 years and practices “Proactive Policing”. Vehicle Crime and Crime prevention as his career passion and contributes largely to his successes. His nomination is well deserved and I have no hesitation in proposing him for the Components parts marking award!

Successes: The successes are based on Vehicles recovered between Apr 2018 to Apr 2020:

Investigative Techniques applied: Proactive Policing and Crime Prevention are one of W/O Jacob's passions. While on Patrol, vehicles are stopped and checked using the following methods. VIN and Engine Numbers are inspected to ascertain whether there is tampering. Further inspections are done on the VIN plates affixed to the vehicle firewall as per legislation; as well as the windscreen visible VIN. The vehicle is seized any discrepancies found at the time are investigated at the VCIU (Vehicle Crime Investigative Unit) pound. The primary source I use is microdot technology, which allows me to ascertain the original VIN of the suspect motor vehicle. This is the quickest and most effective method and a vehicle’s true identity is established in under a minute! Reactive Policing is achieved by partnering with Tracker and utilizing their advanced tracking system which is activated by a civilian when Hijacked or stolen. These vehicles VIN’s are then verified using part marking technology as part of the investigative process and preparing the case for prosecution and ultimately; convictions.

As a member of Westrand Flying Squad, I am passionate about combatting Vehicle Crime, utilizing “stop, search and seizure” as well as working on “information received” from reliable Confidential Informants (CI’s).  W/O Jacobs is supported by all Microdot MID’s, through the use of apps, to quickly identify the original VIN of suspect vehicles. Further information technology utilized is the Zonke Unicode system to access the sought vehicle register and relevant case numbers, in order to seize vehicles and impound them. 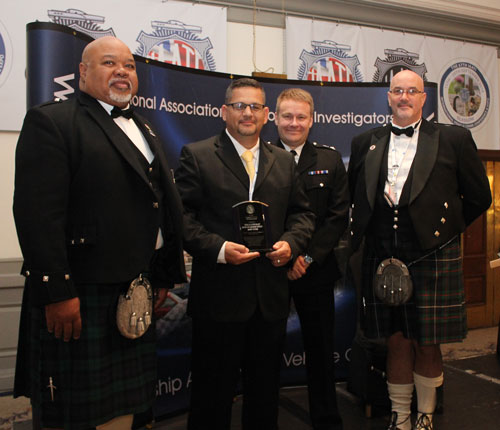 IAATI’s Components Parts Marking Award, sponsored by Recoveri Tag What’s Yours? is intended to honor a person or unit that has distinguished themselves with initiative and/or in- vehicle theft investigations where components parts marking played a significant part in the success.

Since 1993 Officer Thysse has honed his skills in Law Enforcement and his passion has to lead him into the world of vehicle ID markings. Over these last 26 years, Officer Thysse has been involved with many investigations, across multiple jurisdictions and involving many diverse assignments but it is always the same… he applies what he has learned and with diligent effort delivers the goods.

Officer Thysse first joined IAATI in 2011 to be a part of a network of fellow LE Officers that could sharpen his skills and during his membership has been able to share his experience and knowledge across the 54 police stations in his area. The strangest request he ever had for training was by the South African Army Special Forces to give them practical training on how to steal a vehicle. At first, this request seemed to be a joke but it soon became evident they were serious… they needed Officer Thysse’s knowledge to increase their escape and evade ability. It appears the moral of this story is you just don’t know where your training and skills will take you so always be ready for an adventure!

If you have worked with Officer Thysse, the view you would use to identify him would be more like the photo below… where he has his head buried inside a vehicle and using his trusty light scoping out the ID marks of a vehicle.

In the year 2018 alone Officer Thysse, tasked with conducting all of the physical examinations at the Isipingo South Africa Police Service yard in Durban KwaZulu Natal, has inspected 3,540 vehicles.

During this year he achieved the identification of 48 vehicles where the only ID marks left to check were microdots. The combined value of these vehicles is 552,154 US dollars.

He also successfully identified 92 vehicles using only their “component markings” and the combined value of these vehicles was 941,385 US dollars.

What does Officer Thysse credit as his ability to achieve such amazing results? 1. He treats each vehicle as a live crime scene. 2. He protects the information that is connected to this examination. 3. He then follows the investigation process taught to him during his training. 4. The cornerstone to his success is knowing where and how to read the ID marks that have been placed on the vehicle.

Whether these are OEM or aftermarket, these ID marks are the identification clues that are the key to establishing the true ID of a vehicle and his work would not be possible without them.

IAATI also wants to encourage others to engage in the world of components parts marking. While you may never be asked to train the military how to steal a vehicle, using the training IAATI has to offer can lead to the same success Officer Thysse has seen. We encourage you to learn more about OEM (VINs, ID marks, OEM electronic parts marking) and Aftermarket (Etching or Branding Solutions, Electronic Parts Marking RF Tags, Microdots, DNA Fluids, UV Light Markings.)

This year the award was awarded to Stanislaus County Auto Theft Taskforce (STANCATT) for their case called: “Attack of the Clones. “ 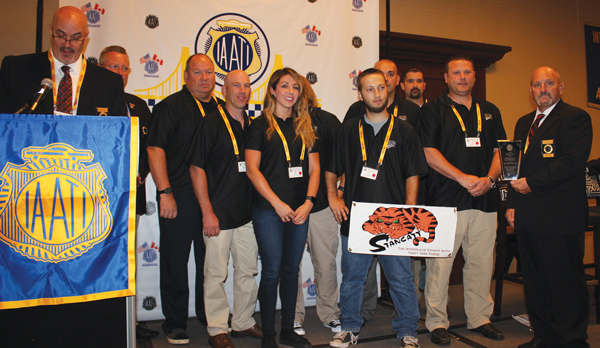 When this auto task force “looked a little deeper”, they demonstrated very effectively how components parks marking are more than just a way to ID a vehicle! By connecting the dots they were able to discover and shut down a criminal enterprise beyond just a stolen vehicle.

SYNOPSIS for “Attack of the Clones”

On August 4, 2017, Central Division Stanislaus County Auto Theft Task Force (STANCATT) initiated a VIN switch investigation, but what started out as an investigation of a possible cloned vehicle led to much more.

Recoveri, Tag What’s Yours? is very honored to provide this award to the STANCATT team and would like to congratulate:

Recoveri, Tag What’s Yours? also wants to encourage others to engage in the world of components parts marking. While in this case it was an OEM VIN label used, there are many labels that can be utilized during an investigation.

At your next IAATI training opportunity learn more about these labels and you too can look deeper.

This award is intended to honor any person or unit possessing the qualifications of an active member of IAATI, although membership is not a perquisite, who has in some way distinguished themselves in vehicle theft investigations where VIN labels or micro-dot technology played a significant part of the success of the investigation. 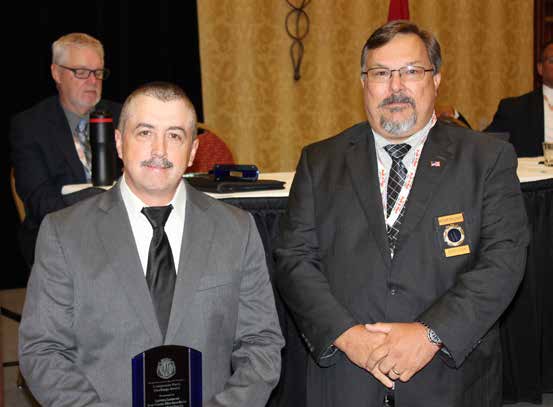 This year’s winner was United States Customs and Border Protection Sgt. Steve Warriner. Sgt. Warriner is assigned to the Port of Entry in Trout River New York bordering the Canadian Providence of Quebec.

In February 2014, Sgt. Warriner was investigating the contents of a shipping container being shipped by a Numbered Company in Quebec to the Middle East. The container contents which were labeled auto parts appeared to contain more than what was listed on the bill of lading.

A check of the container proved that he was correct. The contained did contain assorted auto parts, but also included a front clip from a BMW (VIN removed) and several “A” Pillars with the Federal Safety Certification Label scratched off. The “A” Pillars were cut and were out from the cars and were worthless (only for junk).

The investigation pointed to the numbered company in Canada and it appeared the owner of the shipping company was a known suspect of vehicle theft. A few weeks later, two more containers were sent out by this company (via rail) destined for the UAE. Sgt. Warriner immediately set up a VACIS (Vehicle And Cargo Inspection System) (X-Ray Imaging) exam of the containers, which revealed that there were at least 6 – 7 vehicles in the containers which were again labeled as auto parts with a combined listed value of $ 67,000.00. The containers were held, the “meat and potatoes” of the investigation. Sgt. Warriner, along with members from other various law enforcement agencies off-loaded all the contents of the containers: a multitude of; fenders, doors, hoods, quarter panels, glass, sunroofs, airbags, headlight assemblies, and other miscellaneous parts).

An examination of all the parts found that several anti-theft labels had been removed in an attempt to hide the identity of the parts. The parts were all photographed and categorized. 7 front clips in the containers all had the VINs removed, in an attempt to hide their identity. Anti-theft glass etching was found on several parts, which lead to the true identity of the vehicles. After all was said and done, and the parts were identified as stolen, 7 vehicles were recovered, along with several parts from 6 other stolen vehicles – all were stolen from the Greater Montreal, Quebec area. Total combined amount was over $ 300,000.00. But the case did not end there. 6months later, the bad guys were at it again, and attempted to ship (via rail) another container which was also found by Sgt. Warriner to contain another 4 stolen vehicles.

The same process was conducted, parts were off loaded, photographed and categorized. Vehicles again stolen from the Greater Montreal Quebec area, with a combined total of over $ 175,000.00 were recovered.

Congratulations to Sgt. Warriner on a job well done.