The DataDot Investigation of the Year Award was open to any organisation (public or private) that has relied upon the DataDot component identification product in an investigation of motor vehicles. The award was sponsored by DataDot Technology (Australia) Pty Ltd.

2014 DataDot Investigation of the Year 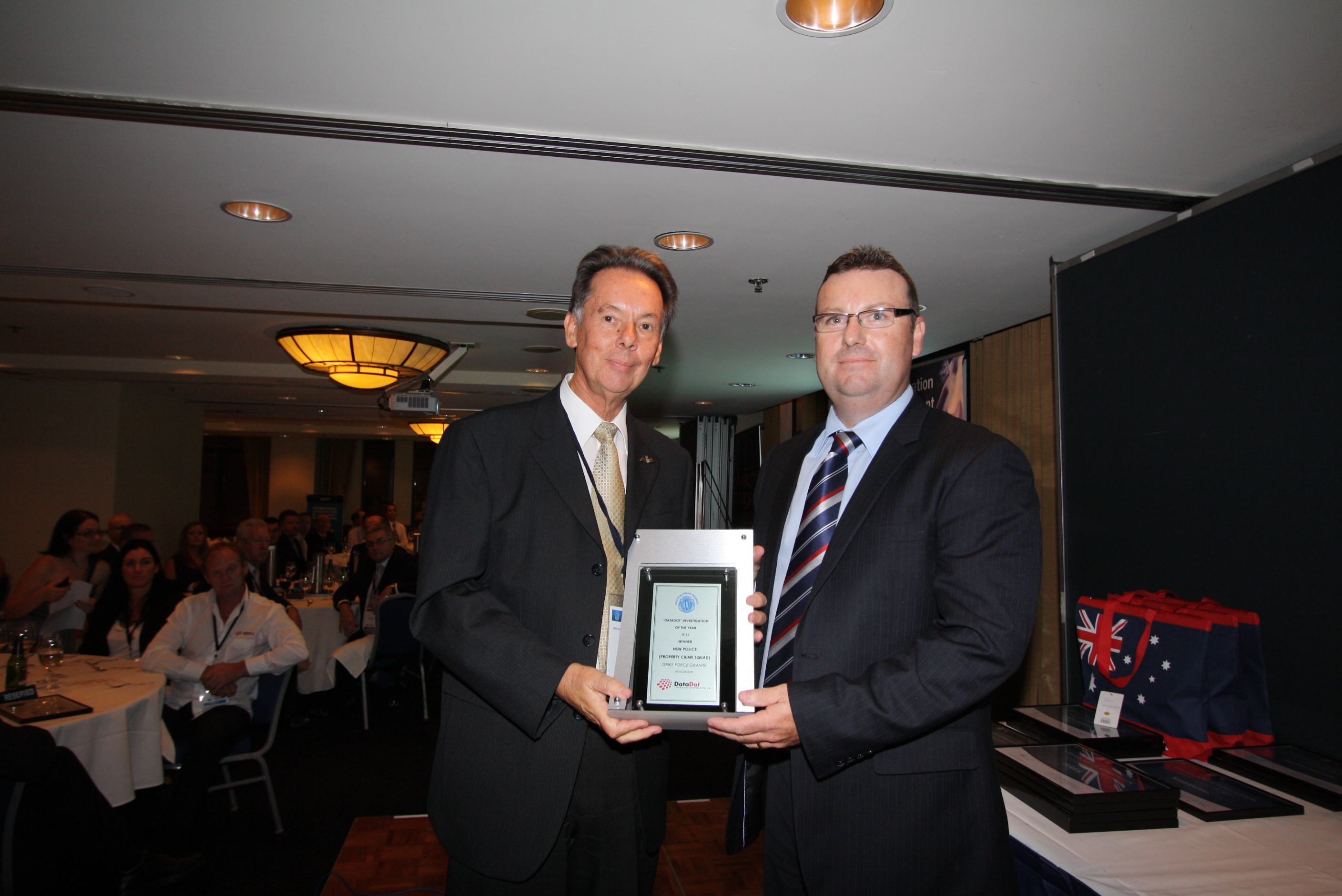 2013 DataDot Investigation of the Year Award

DataDot Technology (Aust) have been a long time supporter of IAATI and sponsor of the DataDot Investigation of the Year award.

This year, DataDot were represented by Ms Nici Andronicus and one of DataDot’s key supporters Mr Richard Wells of Subaru to announce the award winner, Detective Senior Constable Joshua Tam of North Shore LAC NSW Police Force. DSC Tam was nominated for his work on an investigation in which an employee of a Subaru dealership was stealing car parts from trade-in Subaru vehicles, and selling the stolen property for gain. In addition to other investigation techniques, it was through the use of DataDot Technology that DSC Tam was able to recover stolen property and obtain the evidence of positive identification he needed to prove that the recovered Subaru parts were stolen.

As a result of his use of DataDot Technology, DSC Tam was able to successfully lay charges of larceny against the (now former) staff member, and prevent further auto crime from occurring. 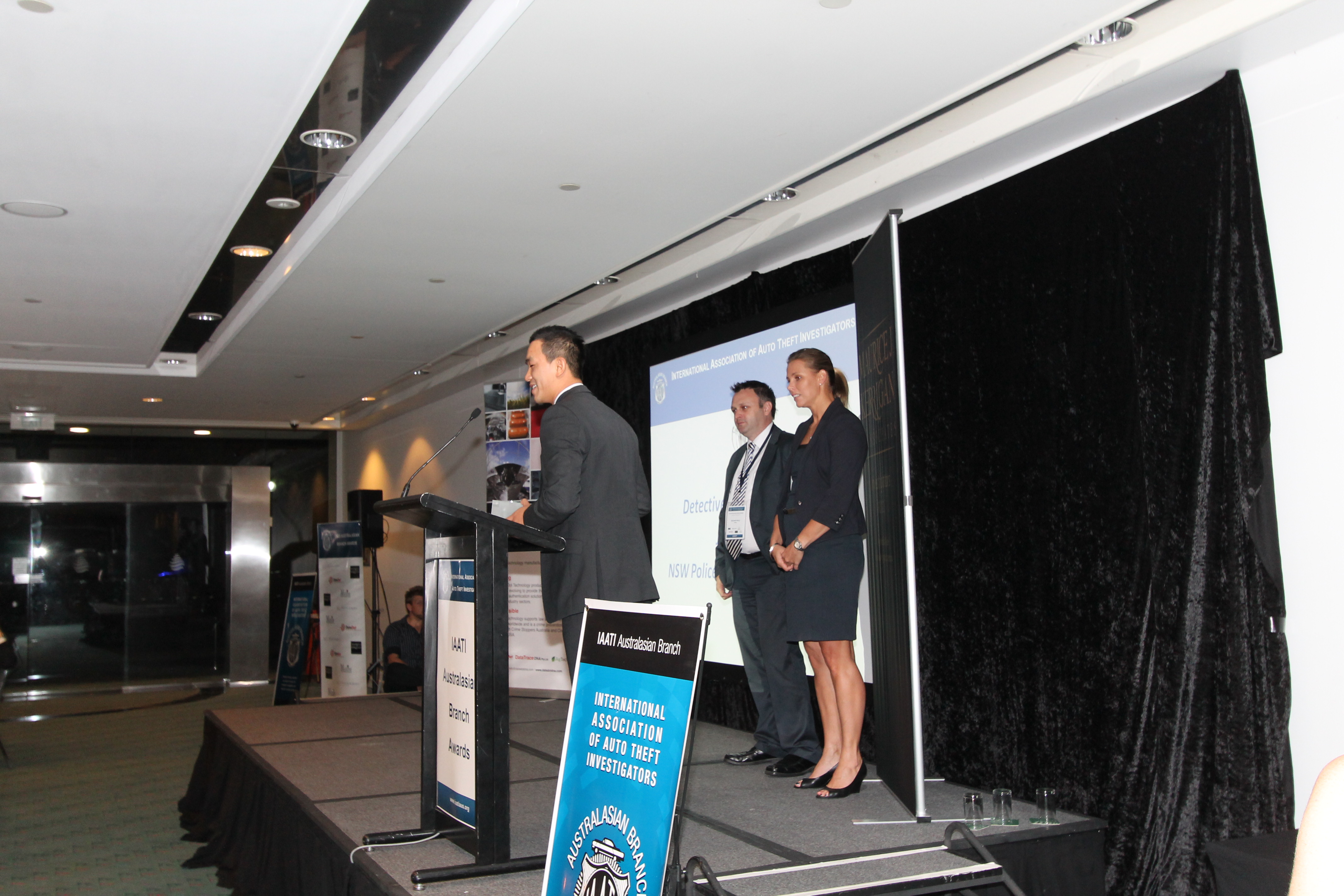 2012 DataDot Investigation of the Year Award

Once again, DataDot Australia showed their support for IAATI by sponsoring the DataDot Investigation of the Year Award, to recognise excellent results in the investigation of motor crime using DataDot technology.

This year’s winner of the DataDot Investigation of the Year Award was NSW Police Property Crime Squad for Strike Force Nelme. Strike Force Nelme was an inter-agency task force, targeting repairable write-off vehicles, unlicensed motor repairers and auto parts recyclers. Whilst executing examinations at auto parts recyclers at Strike Force Nelme, the team demonstrated two fantastic examples of the DataDot technology in action to identify stolen vehicles and stolen vehicle parts, leading to criminal charges that could not have been achieved without DataDot technology. 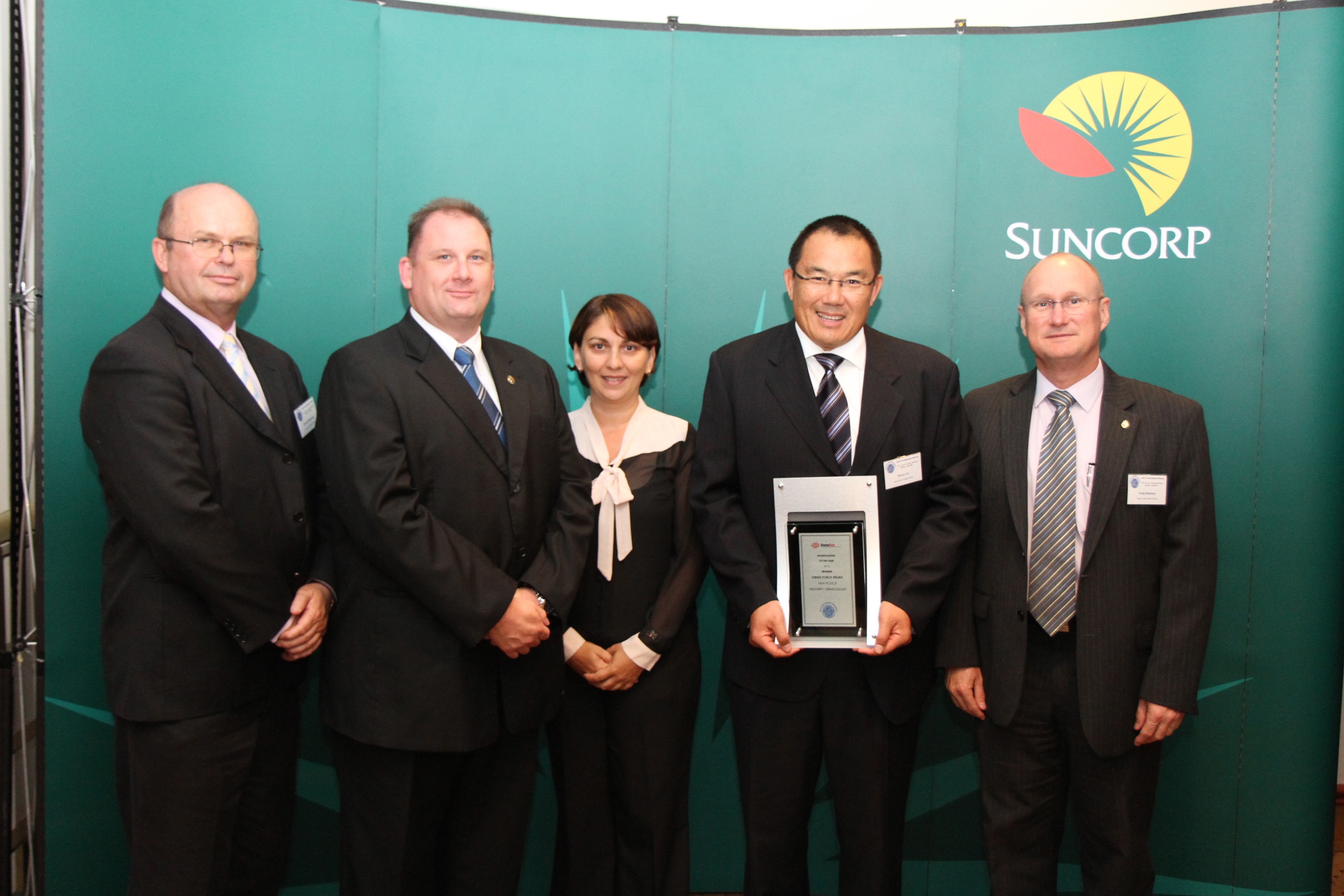 2011 ‘DataDot Investigation of the Year’

A key issue with this case was the identification of the vehicles and vessels.  Without this the prosecution of the offenders would have been difficult.  The experience of the police personnel quickly identified that one of the vessels was fitted with a 100hp Yamaha outboard motor and that this model has DataDots. Police then turned their attention to the recovery of the DataDot identifiers and were able to identify the vessel.

The identification of this vessel enabled police to strengthen their case of the other stolen vehicles and vessels recovered through ‘similar fact’ evidence which led to a successful prosecution.

This case highlights the importance of identification and without DataDot technology this case may have dissolved. The experience, knowledge and actions of police were evident throughout the investigation. 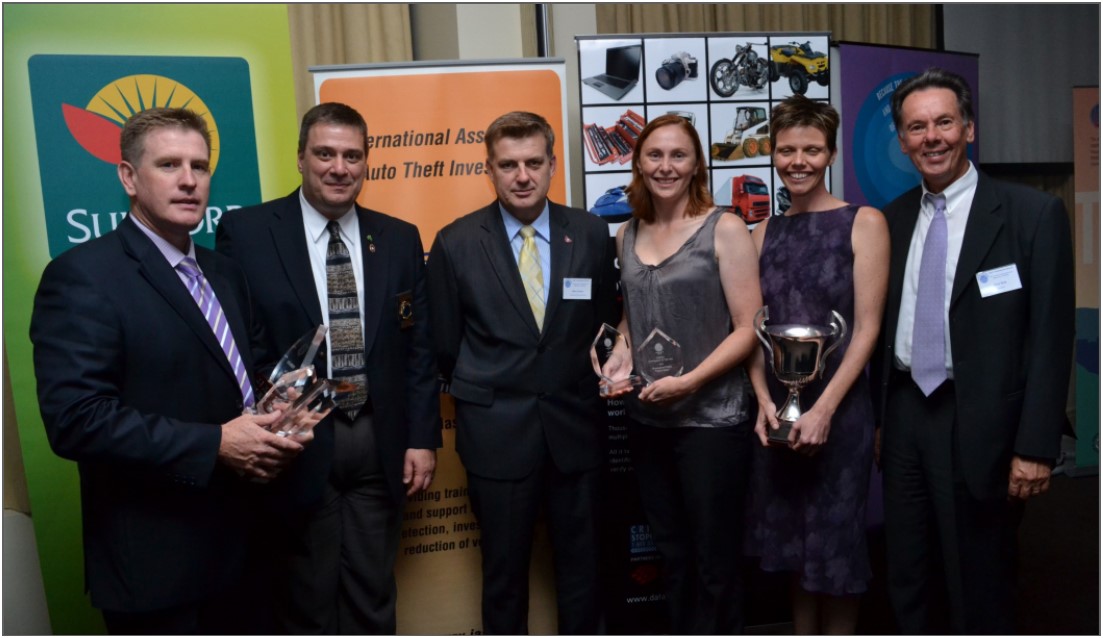 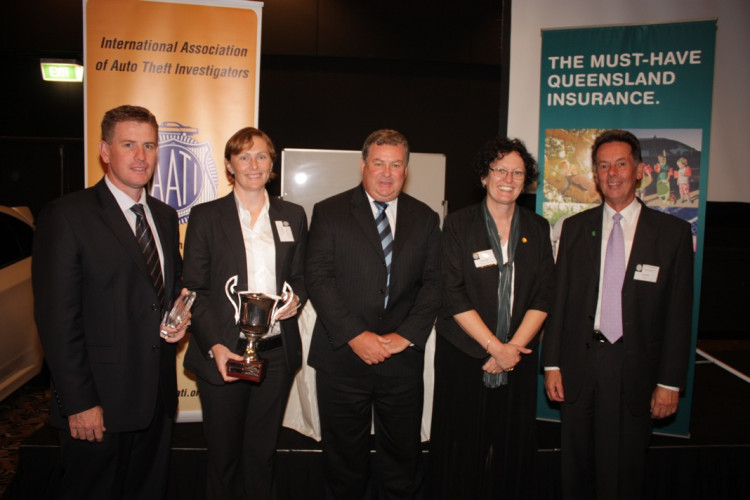 On 24 April 2009, police attended an address in response to information concerning a suspect motor vehicle.  At that location Police located a 2008 Grand Cherokee Jeep, valued at $80,000 that had recently been reported stolen in New South Wales.  Police observed that this was a rural property and there were many cars on the premises.  A subsequent check on these vehicles located nine vehicles that had previously been reported stolen.

The occupier of the premises was questioned regarding the vehicles and eventually admitted that all of the vehicles had been reported stolen and that they were the proceeds from insurance fraud.  He stated that he had been approached from various people to arrange for the disposal of the cars.

Due to the overwhelming evidence being gathered against him the proprietor turned informant and stated that on that night he was supposed to collect an Alfa coupe from a tow truck driver.  He stated that he did not know the owner but knew that they were going to report the theft on the Monday morning and that his role was to collect the vehicle and then get the Alfa key back to the tow truck driver so the owner would have the keys when the theft was reported, in case it was queried by Police or insurance investigators.

Police attended this carpark on this night and located the Alfa and subsequently seized that vehicle on the belief that an attempt of Fraud was being committed on an insurance company.

On Monday 27 April 2009 the registered owner of the Alfa attended the Surfers Paradise Police Station and reported her vehicle stolen.  Police hatched a plan whereby it was necessary to have the key returned to the owner to give credibility to her story that the Alfa was stolen.

The Informer had been contacted by the tow truck driver advising that that the Alfa key was needed by the owner.  As the Alfa key was strong evidence of the fraud police were reluctant to re-introduce the key through the network and attempts were made to locate an identical key in a very short amount of time. Due to the specific wear patterns on the key and its uniqueness this was proving impossible given the small window of opportunity.

Police then were resigned to using the original key in the strategy, though prior to re-introducing the key it was sprayed with “QPS Auto Theft” DataDots.  On Monday afternoon the key was returned to the tow truck driver in accordance with the original instructions.  Officers followed the tow truck driver to Brisbane and then an address on the Gold Coast which was found to belong to a proprietor of a prominent panel beater.

Whilst being interviewed by insurance investigator the owner of the car produced an Alfa key as proof of the theft of her vehicle.  She stated that she had only ever been given one key with the vehicle when she had purchased it second hand.  She was very adamant and confident in her demeanour that her vehicle was stolen and denied any involvement in the theft.

Following this insurance interview police obtained the Alfa key which was immediately identified as being the DataDotted key.  On 11 June 2009 police executed several search warrants on the Gold Coast in relation to this investigation and 17 persons were arrested on 26 charges relating to the systematic fraud on insurance companies.

In October 2008, the local county police raided a suspected ‘chop shop’, and found over 6000 car parts from almost 1000 cars. The police as part of the investigation carried out a forensic examination of selected parts.

This examination identified microdots on a large number of dismantled components which bore the VIN of the source vehicle. This was as a direct consequence of the Whole of Vehicle Marking scheme introduced by the Taiwan Government in 2005. As a result of this they were able to confirm that many of the parts belonged to stolen cars. The investigation led to 3 arrests and subsequent convictions. The value of the goods seized was over $9,000,000 Australian dollars. 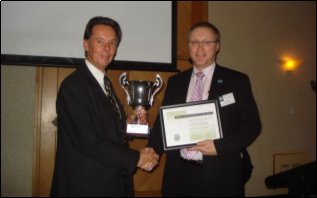 Chris Stott (Head of OEM & Automation, DataDot Technology Ltd.) presenting the 2009 DataDot Investigation of the Year Award.  The award was accepted by Past President Paul Thomas (R) on behalf of the Taiwan Crime Bureau. 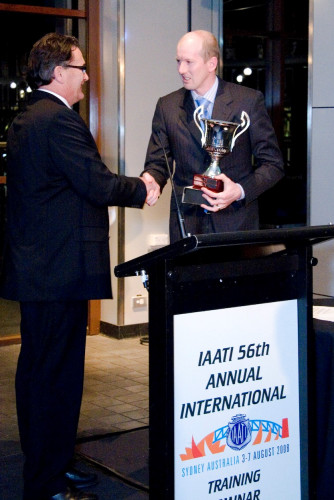 2008 DataDot Investigation of the Year Award

In January 2007 two motor vehicles were stolen from a car yard in Western Sydney. Police received information that these vehicles were at a house in Belmore. An investigation commenced and in February 2007 a search warrant was executed at these premises resulting in the location of parts from one of the stolen motor vehicles. A business inspection was also conducted on a licensed smash repairer and further parts from the same stolen vehicle were recovered.  One person was arrested and charged with receiving stolen motor vehicle parts.

As a result further associates were identified and a number of investigative strategies commenced resulting in four search warrants being executed in March 2007, on a variety of residential premises in Bass Hill and Berala. Police located and seized eleven suspected rebirthed motor vehicles, thirteen motor cycles, a jet boat and jet ski together with a large amount of vehicle parts and accessories.  Also a significant quantity of mobile phones, car stereo equipment and hand held GPS units that were linked to a number of commercial break and enter offences in NSW and Victoria.

One man was arrested and charged with the stealing of the two motor vehicles from the car dealer.

All in all a total of twenty nine motor vehicles, motor cycles, jet boat and jet ski that had previously been stolen were located either whole or in parts and linked to this family syndicate to a value of approximately $500,000.00.

The other property located was identified as being stolen from commercial premises during 2006.  This property was valued at $50,000.00

Seven family members (four brothers, two wives and a mother) and two associates were arrested and charged over a period of six months with a total of seventy three offences ranging from:-

At the time of writing two persons have pleaded guilty to offences of receiving stolen motor vehicle parts and hindering a police investigation. The other accused are  before the courts awaiting committal proceedings. 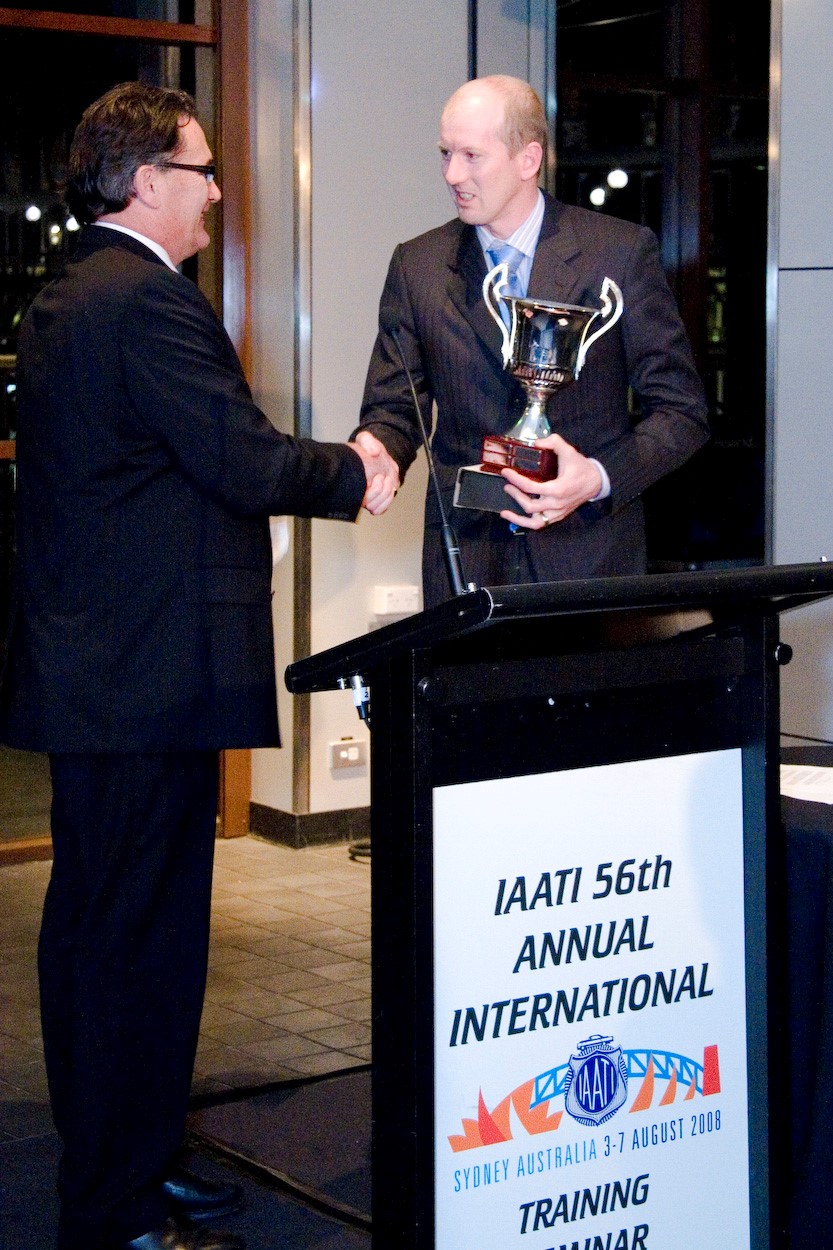 2006 Datadot Investigation Of The Year

2006 is the second year that IAATI has offered the “DataDot Investigation of the Year Award”. Some may not be aware that microdots were first developed by the Allies towards the close of WW2 to send information across enemy lines.

Submissions for the award are open to any police or insurance investigation that uses the DataDot component identification product as a means of identifying stolen vehicles. This award is sponsored by DataDot Technology.

This year’s “DataDot Investigation of the Year” award was won by NSW Police. “Operation MASERATI” was conducted by Property Crime Squad staff from State Crime Command, based in Sydney.

In October 2004, an officer from St George Local Area Command identified a growing incidence of wheel theft from late model Subarus, particularly Libertys and Outback models. As part of her enquiries, she examined the Ebay auction site and identified a Sydney-based individual selling same.

In December, Police visited the home of this individual and purchased a set of 5 wheels. Since each of the wheels were marked with DataDots, each was quickly identified as having been stolen from vehicles throughout Sydney in recent weeks.

Following more UC purchases, police arrested the seller and subsequently executed search warrants on his residence and a storage facility. Final enquiries identified more than 300 items of stolen property and 168 wheels, the majority of which were marked with Datadots and were returned to their owners.

As a result of the simplified identification process, the key offender awaits trial on 139 charges including Receiving Stolen Property, also Take and Drive Conveyance for using a stolen car to meet with UC Police. 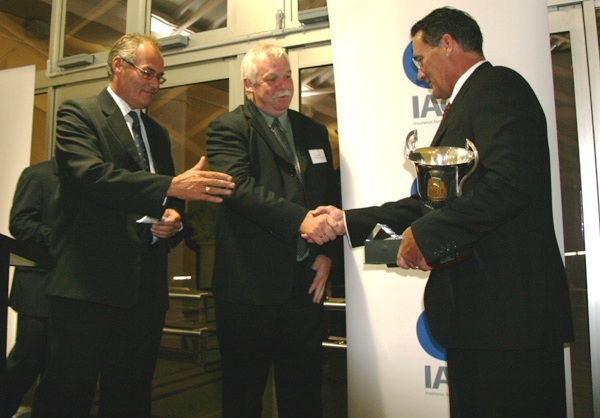 2005 DataDot Investigation of the Year

Sponsored by DataDot Technology Ltd, this award was offered for the first time in 2005. The award was won by Operation COUPE, a Victoria Police investigation that began as a series of enquiries into the theft of Holden Commodore HSV wheels. These are valued at between AUS $2,500 and $6,000 per set. Enquiries were initiated when the wheels from a stolen vehicle were identified using DataDots as belonging to a 2002 Commodore stolen from a panel shop using the original keys.

Intelligence gathered in relation to Commodore wheel theft indicated that stolen parts were being sold through a limited number of specific outlets in Melbourne. Intelligence further indicated that the two key targets were involved in the rebirthing of a number of other vehicles.

The total value of vehicles recovered was approximately AUS $4 million, with an additional $700,000 in wheels and other parts. Nine key targets were arrested and charged in relation to these matters.